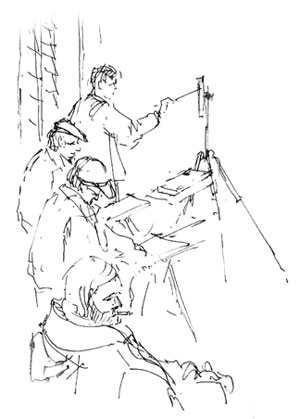 The Wapping Group of Artists: History

The Wapping Group had its origins in 1939, when members of the Artists Society and the Langham Sketching Club, meeting at the Prospect of Whitby pub in Wapping, decided to spend the summer months sketching together by the river Thames. Then the Second World War intervened, but the same artists met again in 1946 to found the Wapping Group formally. The first President was Jack Merriott.

The maximum number of members was set at twenty-five, and the group was dedicated to painting together outdoors, exhibitions being a secondary consideration. The painting season was to be from April to September as it is today. In early years the group was closely associated with the Port of London Authority, and held its first three annual exhibitions at the PLA headquarters before moving to the Royal Exchange Gallery, where they were held for the next thirty years.

In 1981 the venue was moved to St Botolph's Church, Aldgate, where annual exhibitions were located until 2002. Since 2003 they have been held at the Mall Galleries, SW1. Other occasional exhibitions are held elsewhere, usually at the invitation of other galleries and institutions. Such venues include The Guildhall, The Henley River and Rowing Museum, The Lincoln Joyce Fine Art Gallery, The Ox Market, Chichester, the Mine gallery in Carshalton and the Chris Beetles gallery.

Originally the painting area was concentrated between Westminster and Gravesend, but has steadily widened over the years. Today it ranges from Henley, up-river, through London and out to the Rivers Medway, Crouch and Blackwater.

A number of traditions have developed over the years, such as the Whitebait Suppers which start and finish the painting season and the annual paintings raffle, but the Group is proud to have remained exactly what it first set out to be: a small group of fellow-artists, appreciating each other's company while painting outdoors together in all weathers.

Almost incidentally, it has recorded the changing face of London and the river Thames for over sixty years.