History was made at the Group’s Annual General Meeting on April 6 2016 when Rosemary Miller was elected to full membership of the Group on a unanimous vote. This earns Rosemary the distinction of being the first woman member to join the Wapping group since its formation in 1946.

Rosemary  lives in Guildford and had a career in display and exhibition work before becoming a professional artist some 15 years ago. She works predominantly in watercolour and enjoys looking for the unusual viewpoint when painting en plein air. She is a full member of the Society of Women Artists where she has won the Anthony J Lester award and the Rosemary and Co. Award, and she serves on the SWA’s Council.  She has exhibited with the RSMA and the RI, as well as at various private galleries.

In other news from the AGM, Anthony Flemming, who has been a dedicated Wapper since 1990, was made an Honorary Member. New Candidates for the comimg year are Chris Burdett, Graham Davies , and John Walsom. 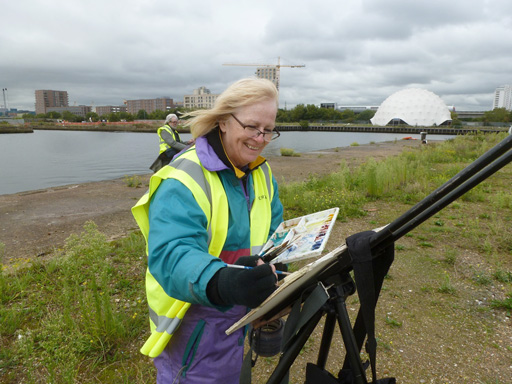